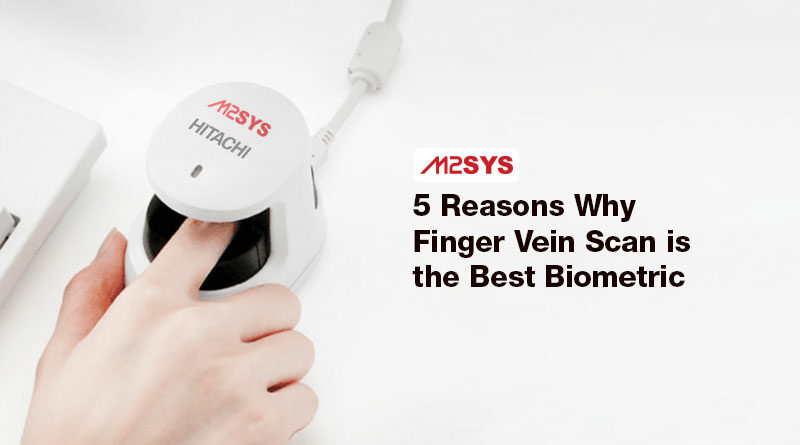 Finger vein biometrics, also known as vascular technology, is a biometric authentication method that analyzes the patterns of blood vessels on the surface of the skin of fingers. Unlike traditional biometric features like fingerprints, vascular network patterns can’t be seen without special equipment, and this makes it very hard to steal or make copies of biometric information.

A finger vein scan is powerful; it uses the internal vein pattern of your finger to identify you. Finger vein authentication technology is a relatively new biometric. Each person’s finger vein characteristic is unique and does not change like a fingerprint. Fingerprint and facial biometrics, on the contrary, don’t offer several key security and privacy features that finger vein can.

How Does a Finger Vein Biometric Reader Work?

An attester terminal with a near-infrared LED (light-emitting diode) light and a monochrome CCD (charge-coupled device) camera capture the unique vein pattern beneath the user’s skin to authenticate their identity. The hemoglobin in the blood absorbs the infra-red light, which causes the vein to appear as a network of lines, and the reader records the captured image as a unique encrypted code that serves as your biometric ID.

A finger vein reader scans the finger in the same way it was done before for authentication, and the data is checked against a database of registered photographs. It takes less than two seconds to complete the process. Finger vein readers can be integrated into various systems, allowing universal and secure identification.

● Security: Since finger vein scanning is internal, it is more secure than other biometrics. Consider biometrics as a password, but instead of using numbers or codes, you’re logging in with your finger veins.

However, some biometrics, such as facial recognition, have a significant flaw: they are exploitable. You wouldn’t post your passwords on social platforms for everyone to see, right? Yet, if someone uses facial recognition for identification purposes, their password, that is, their face, is exposed everywhere they go.

As a result, traditional biometrics are prone to theft and duplication; the technology is still subject to increasingly sophisticated spoofing methods. But with a finger vein scan, since the biometric data is hidden inside your veins, it is extremely tough for a third party to steal this pattern and make a replica with it.

● Privacy: As finger veins are internal, they provide great security benefits and major privacy benefits. The biggest disadvantage of facial recognition is that your face is exposed everywhere you go, making it easy for face scanners to identify you from a distance without your permission.

Because the finger vein remains inside the body, it can only be captured with a high-resolution camera and UV light. So, it is tough to capture it unless you scan your finger on purpose. This makes finger veins uniquely designed for privacy.

The privacy feature has several advantages for businesses wishing to incorporate finger veins in their operations:

o A finger vein scan may be perceived as more trustworthy authentication method by your team members or customers because it focuses on privacy, making it easier for them to implement.
o Since consent is an important matter in privacy laws worldwide, consent-based design makes it easy for you to comply with these laws and avoid legal issues.

● Reliability: the pattern of a person’s finger veins remains relatively steady throughout their lives, minimizing the need for future re-enrollment.

Other biometrics, such as fingerprints, are more sensitive to change over time. Because fingerprints are exposed, they are susceptible to wear and damage. Finger cuts and bruises can cause fingerprint scanners to fail to recognize an authorized user, resulting in mistakenly refused access.

On the other hand, the finger vein is at low risk of harm to the vein structure, making it more stable over time. The finger vein reader is also resistant to dirt, dust, dryness, and dampness, allowing it to be used in various settings. This implies that you can count on your finger vein to work every time you scan it, making it an extremely dependable biometric.

● Hygiene: Finger vein scanning is a fully contactless authentication method, which means you don’t have to touch the sensor. Simply place your hand over the reader to identify yourself – no touching necessary. This makes it far more hygienic than other biometrics, like fingerprint scanning, which require you to touch the scanner. This is especially true for biometric devices used by a wide group of people, such as those used by employees or customers.
Furthermore, contactless biometrics are even more critical in businesses requiring rigorous hygiene criteria, such as hospitals and food manufacturing facilities.

What Can Finger Vein Scan Biometrics Be Used For?

Finger vein readers can be used in a wide range of applications across many industries. At M2SYS, for example, we provide a cloud-based platform with built-in features for:

In addition, M2SYS offers an enterprise solution that allows businesses to leverage our platform to create solutions specifically tailored to their needs. If you would like to find out more about the Hitachi H1 Finger Vein Reader, contact our team today, and we can consider together how our system could be adapted for your industry and what kind of value it might add to your project. Feel free to contact us if you have any further questions. 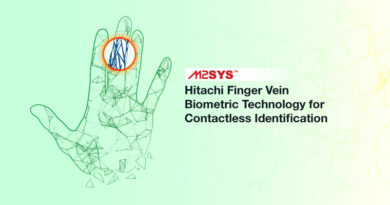